FOR THE CITY OF ROCKPORT TEXAS

Rockport, Texas is located about 30 miles north of Corpus Christi on the Texas Gulf Coast.  Its population of record is less than 10,000.  However, being a vacation destination city, the population may vary upwards of 30,000 people during certain times of the year.  Such a variation in population causes problems with the collection system and at the wastewater treatment plant (WWTP).

In September 2012, Environmental Process USA (EPUSA), LLC, was asked to assist the City in the start-up of an anoxic basin.  The purpose of the new unit process was to reduce the total nitrogen (TN) that was being discharged into Little Bay as part of the plant effluent.  In December 2015, we returned to make modifications to the unit process operations of the WWTP including the anoxic basin.  Our objective was to further reduce the effluent TN concentration.

At that time, the City was using a calcium nitrate-based chemical to control odor in the collection system.  Since the calcium nitrate chemical obviously added extra nitrogen to the WWTP influent, it was recommended that the City cease injecting it into the collection system for one month to determine the impacts on the TN in the WWTP effluent.  Test results showed that the impact was positive reducing the effluent TN significantly.

A replacement chemical was needed to control the collection system odors especially hydrogen sulfide (H2S). EPUSA recommended a product that is being used successfully in similar applications across the United States.  This product, WOW Air B28 is manufactured by FreshAWL, LLC and distributed by EPUSA.

At the end of August 2016, EPUSA installed chemical tanks and metering systems at fifteen (15) locations across the collection system concentrating on those areas of greatest concern near subdivisions and businesses.  Within twenty-four hours after installation, people began noticing a difference throughout the City and at the WWTP.  Not only was the H2S almost eliminated, but the volatile organic acid concentration was significantly reduced.

Some of the benefits of using B28 include the following:

B28 odor control was installed by ENVIRONMENTAL PROCESS USA, LLC the third week of August 2016 in 15 lift stations.

Using the window of time of July 2015 through February 2015 when calcium nitrate based chemical was being used for odor control and comparing those to September 2016 through December 2016 the results are as follows:

As part of the agreement between the City of Rockport and EPUSA, we also act as environmental consultants for the wastewater treatment plant especially in the areas of process chemistry and microbiology.  Each month we are on site for 2-3 days assisting with any issues occurring in the collection system or at the WWTP.

As a follow-up to the odor control project, we have developed some data that further illustrates the effectiveness of using B-28 as an odor control solution.

The involvement of EPUSA was begun long before the odor issue became a focus for EPUSA.  Below is a chronology of events leading up to the present time:

September 2012: We were retained to assist in the startup of a new anoxic basin at the WWTP.  Our objective to install instruments in the anoxic basin and the aeration basin to monitor conditions in the treatment process.  We also trained the operators in intrepretation of the data that was being obtained continuously.

December 2015:  We were contacted to assist in evaluating the anoxic basin to determine why it was not operating properly; that is, the total nitrogen (TN) was not being reduced as expected.  An anoxic basin is not an isolated unit process but rather relies on the satisfactory operation of the entire plant.

We began evaluating the entire operation and made numerous adjustments especially in the aeration basin.  In order to de-nitrify, it is first essential to nitrify and that must occur in the aeration basin.  As part of the evaluation, we examined the influent and was told that a calcium nitrate based odor control chemical was being used.  The influent quality reflected this as over 300 gallons of odor control chemical was being used each month.  The calcium nitrate was contributing over 500 lbs of nitrogen to the WWTP monthly or approximately 20 lbs per day.  This meant that the WWTP must remove the background influent nitrogen but also that being added as part of the odor control process.

February 2016:  The calcium nitrate injection was stopped to determine the impact on the plant.  None was fed into the collection system for March, April, and May of 2016.  The effluent TN dropped from a high of 19.4 ppm monthly average for January 2016 to a monthly average of 8.1 ppm in May and continued to drop to a monthly average of 7.9 in June.  Therefore, from the average monthly high of 19.7 ppm to an average monthly low of 7.9 ppm constituted a reduction of almost 60% simply by removing the influent nitrogen load.  See Figure 1.

June 2016:  The calcium nitrate treatment was resumed in order to deplete the existing inventory and was continued through August 2016.  Even for this short duration, the effluent TN began to increase.

September 2016:  EPUSA began injecting B-28 into the collection at 15 selected lift stations the last week of August 2016.  We continue to use this process to the present although the data is not included for 2017.

FIGURE 1 is a graph of effluent total nitrogen clearly shows the impact of first stopping the use of the calcium nitrate based odor control chemical, then restarting, and finally substituting B-28.

FIGURE 2 is a graph of effluent NH3-N vs. Time and shows that the concentration has decreased significantly and leveled off in the 0.06 to 0.07 ppm range.

FIGURE 3, CBOD vs. Time, shows a overall reduction of approximately 59% in changing from the calcium nitrate-based chemical to B-28 (FreshAWL.com). 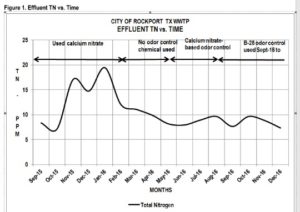 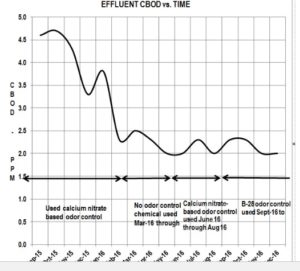